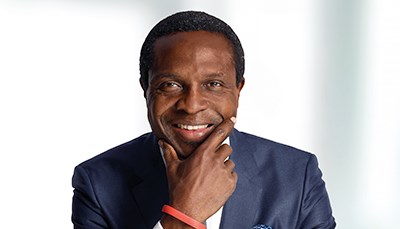 He is the Managing Director and Co-Founder of Sahara Group; a conglomerate which is present in over 13 countries and whose interests cover trading, storage, energy and power resources, aviation, farming and real estate. From an office in 1996 which “was slightly bigger than a cupboard” to use the innovative man’s words, and the core business of trading excess fuel oil from the Port Harcourt and Warri refineries, the Sahara Group has expanded its tentacles to offices in Geneva, Switzerland -which actively trades in crude oil, gas oil, Jet A1, mogas and bitumen in global markets; Ghana, Ivory Coast, Senegal, Cameroon, France, Singapore, Dubai and Brazil.

He attended Corona School, Victoria Island and later King’s College, Lagos before proceeding to King’s School, Ely, Cambridgeshire, United Kingdom. He is also an alumnus of the University of Lagos and Universidade de Brasilia, Brazil. An Architect, he worked in a Brazilian architectural firm Grupo Quartro SA in Goiania Brazil from 1990-92. He was involved in the design and implementation of the urban planning and city development of Palmas, the capital city of the newly created state of Tocantins in far-away South America.

Tonye returned to Nigeria in 1993, and was quickly employed as the Director of Operations EMSA S.A., a Brazilian Civil Engineering Company-allegedly the 7th largest engineering firm in Brazil that was awarded a World Bank-financed water project valued at about $58m for the Lagos State Water Corporation.