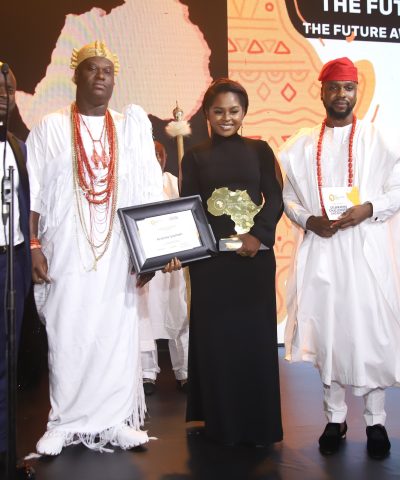 Nigerian-Canadian swim and ready-to-wear fashion designer and CEO, Andrea Iyamah has been honoured as the Young Person of the Year at The 16th edition of the Future Awards Africa held on Sunday, 20 February 2022.

The stunning 28-year-old is the founder of eponymous custom couture brand, ‘Andrea Iyamah’. She taught herself the craft of garment-making and design as a teenager, and later used the coding she learned in college to build the first iteration of her website. In the years since, her line has evolved into A.I. Studio, a multifaceted endeavor that includes accessories and homeware. In addition, she recently launched ‘Seed Ambition’ – a platform dedicated to providing resources for the growth and development of African creatives with careers and businesses within the fashion, art, design, beauty, and media spaces.

Speaking at the Awards, Iyamah thanked the organisers of The Future Awards Africa for providing a “great platform of recognition”. “This has been a fantastic night, absolutely well produced – I’m in fashion and we are very detailed. I absolutely loved the entire experience,” she said.

“If you enter any room, it’s easy to spot a Nigerian – almost every African says this. There’s a specific energy, a specific glory that we come with and I think that it is something every single young person needs to see in themselves. I saw it at a very young age. I started my business when I was 17. I heard a lot of ‘you’re too young to be in business’, ‘You’re too young to chase your dreams’. However, the biggest reason why I did what I did was because I was young. I think that whether you’re young or you’re old, the important thing is as long as you have now, you have enough to build your future.

“A lot of people say they don’t know what the future holds. They’re scared, but I think the best way to influence your future is to be intentional about your present. I just hope that this inspires every teenager, every young person, every old person – because it’s never too late to chase your passion and while you do it, ensure that you’re impacting home. You’re doing it for your roots, from your roots and to the world,” Iyamah concluded.

“The Future Awards Africa has a mandate to build empowered citizens across Africa, through inclusive enterprise and active citizenship and while all nominees in the category have challenged the norm and have blazed the trail for others to follow, Andrea’s consistent strides over the years, coupled her focus on human capital development stood her out this year,” Seun Oluyemi, Chief Content Officer at RED | for Africa and Team Lead, The Future Awards Africa commented.

“Informed by the value proposition that Africa’s growth is determinant upon a generation of young people that are gainfully engaged and have the requisite environment to accelerate innovation, creativity and enterprise, we will continue to play our part by annually spotlighting individuals who have contributed their quota to ensuring that our dream as a people is realised,” he affirmed.

The Future Awards Africa ‘Young Person of the Year’ prize is a cross-industry award created to celebrate young people who achieved groundbreaking feats in the past year and modelled exemplary leadership.

Andrea Iyamah is recognised for her vibrant prints and bold colours inspired by the uniqueness of African culture. In the past year, she released her artistic and stylish swimwear collection, which has been worn by notable personalities, including American actress, Gabrielle Union, and was also featured in Vogue Magazine