“As a celebrity, I had to smile through every performance while I was secretly crying myself to sleep” – Comedian, Singer and Actress, Chioma ‘Chigul’ Omeruah tells #WithChude 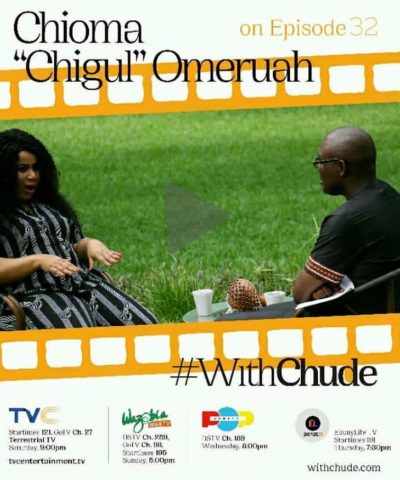 On this week’s episode of #WithChude, comedian, singer and actress, Chioma ‘Chigul’ Omeruah opens up to host and founder of Joy Inc., Chude Jideonwo, about her long battle with depression and the steps she took to find herself once again despite the happenings in her life.

Speaking about her experiences as a performer in the public eye, providing joy to thousands of people, Chioma ‘Chigul’ Omeruah shared how she had battled depression for years as she tried so hard to infuse the energy she was pouring out to her fans during each show into her own person space.

“I was depressed for years. People cannot understand until they have been in it. It is not something you can use words to explain. First of all what people don’t understand is that when you are in a situation where you do not feel whole from the beginning, and then there is some more stripping happening in that situation, your unwholesomeness becomes more apparent to you because you realise that you had no self-esteem. I didn’t believe in myself,” she explained.

“Yes I was Chigul and people liked me and I had fans. However, that was not it. That was not the joy. I did not see anything about myself that was worth liking. I thought that maybe I was unlovable; will it ever work for me? You are a woman, when you wake up in the morning and do all the things you do, comb your hair and wear makeup and you feel good. However, on the inside you feel like an empty trash bag. That does not stop you from coming out and putting up the performance of a lifetime.

“Once that is all done and dusted, you return home, take all of this off, lie in bed alone and you cry yourself to sleep sometimes. The next day you are up, putting up another performance that means the world to your fans; repeating the process again. I had to come to a point where I just said, ‘Lord you must have a plan. I choose to trust you’. I was in a theoretical production of my life for a while, but the show has ended. That show has ended!” she said.

Chioma ‘Chigul’ Omeruah made a choice to end the theoretical production that was her life of depression, but she continues to entertain thousands of people with her unique comedy style; giving comfort to those in the same boat as she was.