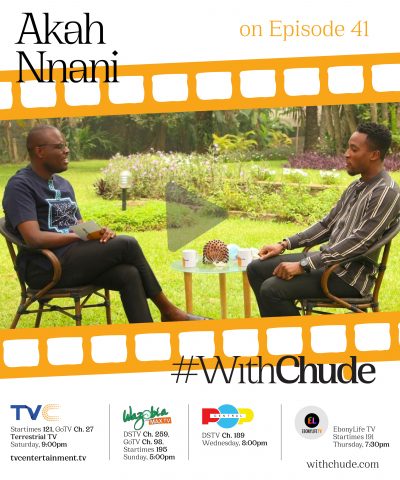 This week’s episode of #WithChude is a sharp contrast from the rape stories that we usually hear in our society today –  where the victim is the person who claims to be raped, and the culprit is the person being accused of rape. However, Actor, Tv Host and foremost content creator Akah Nnnani sheds light on what it means to be the accused and still be the victim as he narrated his gruesome experience of being falsely accused of rape as a teenager, how this experience formed the negative perception of women he held on to for years, and how he was able to heal from the trauma and go on to become a caring husband and father of one.

When I was in secondary school, I was wrongfully accused of rape, and I was expelled. Time had passed before it was sorted out and truth came out, but I had lost a year,” he said.

When Akah was eventually called back, he chose to return to the school; however, he revealed that the shame of the experience changed his perspective about women for the worse.

“After that – years later, I just came out thinking women were evil and rape isn’t real – it’s a lie; because a woman sould say yes and then tell the world she said no – because of what had happened to me. It’s a selfish perspective,” he continued.

Akah admitted that when a Twitter user “Sugabelly” shared her harrowing rape experience, he joined the bandwagon of publicly criticised people and tagged her story a lie.

“I was just like, ‘you’re lying’. I interpreted it as the same thing that happened to me. I was a young kid and didn’t know the statistics. In my world I didn’t see men treat women less. My perspective and worldview had not yet been fully formed. I joined the people who attacked her on social media, and I regret it,” he confessed.

Although Akah has once publicly apologised to Sugabelly, he wishes that he could see her face-to-face and apologise again, as his perspectives about life have now changed, especially since his daughter’s birth.

Akah has since forgiven his accuser, married the love of his life- Claire Idera and the duo have a beautiful daughter. He revealed that his greatest lesson about marriage is that it is a “competition to outserve the other person” and that his faith has helped him realise that unconditional love is the greatest force on earth. He explained how recognising this simple truth turned his marriage around, and he has grown to become a selfless husband and father whose greatest priority is his family.