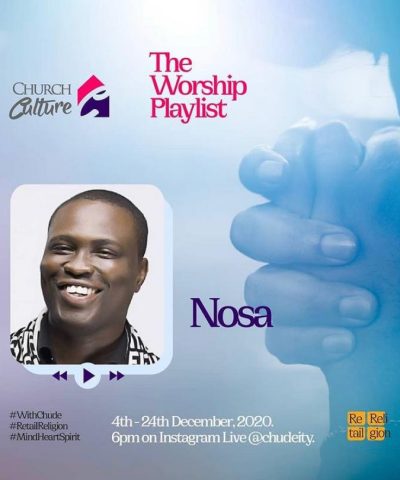 In a three-week conversation series titled The Worship Playlist, host of #WithChude and founder of human flourishing company Joy, Inc., Chude Jideonwo, unveiled the vulnerable side of some of the country’s favourite worship leaders. In his one-hour conversation with Chude, Gospel singer Nosa Omoregie made a revelation about losing a child and God’s faithfulness through it.

Known professionally as Nosa, the singer revealed to Chude that his wife had put to bed four months ago in a rare moment of openness. The bundle of blessing, he explained, came after they lost a pregnancy in August of 2019.

“My wife and I have a four-month-old baby now,” he said, “this is after we lost a baby – we lost a pregnancy in August last year.”

The revelation is momentous for Nosa specifically because the singer is known to keep his private life under tight wraps, something he reiterated as he shared with Chude. “You know how I keep my private life private,” he said.

The new father went on to gush about the rush of protective affection he felt when he first met his daughter, “I wanted to protect her, provide for her, in that instant, her whole life flashed before my eyes. I was numb.”
Comparing that to the enduring love of God, Nosa said, “That is how God sees all his children, but times 1 million.”

The conversation, which happened on Instagram live, will be repurposed for TV next year as part of the #RetailReligion arm of #WithChude.

#WithChude is a special series of targeted multimedia conversations and investigations focused on narratives that enable and strengthen the mind, heart, and spirit. New episodes of #WithChude show every Saturday at 9 pm on TVC Entertainment, with reruns every Sunday on Wazobia TV at 5 pm, Wednesday at 8.30 pm on PopCentral station, and every Thursday on EbonyLife TV at 7:30 pm.