“I was watching my father’s funeral while recording Dad’s Song” – Teniola Apata discusses losing loved ones, debut album and more#WithChude 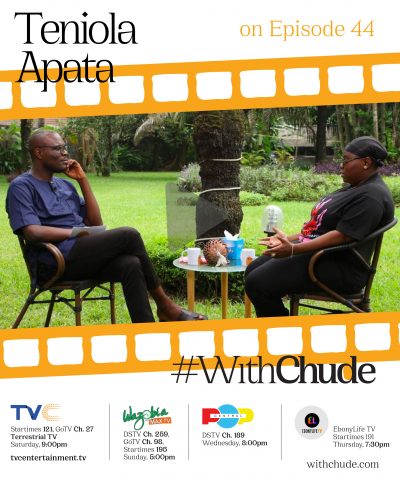 This week’s episode of #WithChude showed a different side to the award-winning artiste and entertainer Teniola Apata. In this rather emotional interview with the host and founder of Joy, Inc. – Chude Jideonwo, Teni discussed her views on feminism, dealing with the loss of a loved one, and the inspiration behind her hit single – Uyo Meyo.

Coming from a wealthy home, Teni was used to getting her way. However, after the death of her trusted assistant, she soon realised that death wasn’t something that could be solved with money, phone calls or connections. She also revealed that it was at that moment that she discovered that she wasn’t “invincible”.

The death of her assistant wasn’t Teni’s first encounter with losing a loved one. She also lost her father at a very young age. This tragic loss is the inspiration behind the song-Dad’s Song-on her recently released debut album, ‘Wondaland’.

“Dad’s song is a song for everyone that has lost someone. Dealing with loss is crazy because people tell you that you’ll get over it, but you never get over it. You just don’t get over loss”, said Teni.

“When I was recording this song I was sitting in my living room and watching my father’s funeral-his body in the casket, my mother crying. I needed those emotions to be able to record that song in its true form. Everything I sang had to be from a place of truth”, she continued.

Teni spoke rather fondly of her father, describing him as “a genius” and “a man deserving of idolisation”. She also revealed that her father planned ahead for the family, such that even after his death, she was still able to go to school in the United States, and her family could live a decent life.

When asked about her hit single Uyo Meyo, Teni told Chude that her being able to finally graduate after several challenges was her inspiration. “Not being able to graduate on time slowed me down from my music. My parents said, ‘if you’re going to make music, you have to graduate’. I was very frustrated”.

“I remember I was in a car driving to my graduation when I recorded the song, and I was just thinking of all my hard work. My mum is from Ondo, and so Uyo Meyo means, when others win and you celebrate with them, your own too will come. I was happy for my younger sister when she graduated before me, and when my turn finally came, I was happy, and that’s where that song came from”, she said.

In 2020, Teni’s tweet about feminism sparked controversy amongst Twitter users. Teni, however, explained to Chude that she was misunderstood and that sometimes words don’t always come out the way you want. She further highlighted that growing up in a polygamous family with three mothers who were in control of her late father’s assets; she had no reason to look down on “feminists”. “Feminism to me is a lifestyle; in fact it’s a movement. I have always stood up for equal rights. I am coming from a place where women were in control. It is important for women to take charge. I have seen women do it so I know it’s possible”, she continued.