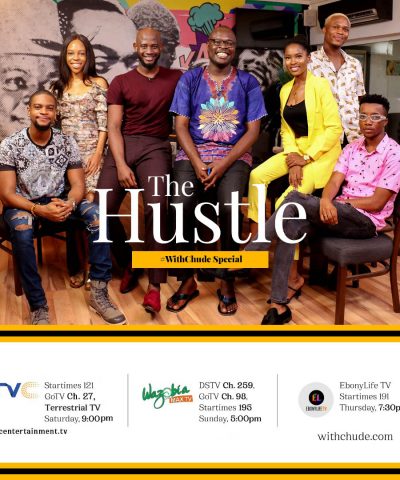 One of the biggest shows of 2020, #WithChude broke its stride on International Youth Day with a special episode celebrating the hustling Nigerian youth. Bringing together 5 rising stars in the entertainment and social-preneurship spaces, host Chude Jideonwo spotlighted a pressing conversation in the heart of every young Nigerian.

Actors Jemima Osunde and Olumide Oworu; celebrity lawyer and social-preneur Lekan Bamidele, popularly known as King Pexxie; rising YouTuber Gbolahan Gaffar, known by many as Gaffy; PR expert Chidinma Nwaukwa; and media personality Temisan Emmanuel brought fun and authenticity to the conversation about the challenges of being young in Nigeria while trying to build a career.

In a country where just living is an extreme sport, succeeding and managing all the pressure and expectation that comes with it in an age of social media can be daunting. For a young star like Jemima Osunde who was just trying to build a career in the entertainment industry, stardom came with its own mountain of expectations.

Speaking on how she handled the pressure, Jemima revealed that,  “Having people who keep you grounded, people that know where you’re coming from, understand your dreams and aspirations, and can call you to order, especially when you’re this young is so important.”

On the topic of financial freedom as a young celebrity, Temisan told Chude, “Money is so important, you have to be at places, you have to show up and you need money. You don’t want to be that person that always has to borrow money from people.”

Olumide agreed and said that sometimes one has to “fake it till they make it” and that show business requires material things that help to facilitate whatever aspect of entertainment a person is involved in.

However, Kingpexxie brought a different perspective to the issue; he believes that people tend to  go overboard by living above their means just to conform to societal standards for celebrities.

With unique viewpoints, the conversation  revealed the plethora of challenges that young people in the entertainment industry face.

#WithChude is a special series of targeted multimedia conversations and investigations focused on narratives that enable and strengthen the mind, heart, and spirit. New episodes of #WithChude show every Saturday at 9pm on TVC Entertainment, and every Thursday on EbonyLife TV at 7:30pm. With an extended play podcast up on Spotify, iTunes among other podcast platforms every Wednesday at 10:00am, everyone can join the conversations.