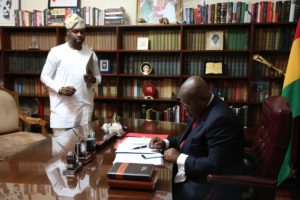 “This is the man with the golden touch,” Nana Addo Dankwa Akufo-Addo excitedly told a guest in full glare of jubilant supporters and an observing press. “Anything he touches turns to gold.”

He is talking about Adebola Williams, chief executive officer of StateCraft Inc, the communication agency that helped power Ghana’s three-time presidential aspirant to a victory this time, becoming President in January.

Both elections are eerily similar. Both incumbents, as Vice-Presidents had stumbled into public office based on the deaths of their principals. Both entered into office on a wave of wild popularity. Their opponents had run at least twice each before (three in the case of Nigeria’s Muhammadu Buhari) – and both had won in the years that they brought in StateCraft Inc to manage their political communication. Both campaigns ran on a ‘Change’ message.

“Because the conditions were so similar, it was easy to replicate a message of ‘Change’,” Williams says during an interview. “Not every election and every context will require a message of change, even though it’s a global movement. “But many countries in West Africa and across Africa are ripe, even desperate for change.”

Williams is co-founder of RED, which is the 11-year-old parent company that houses StateCraft Inc. It’s a network of four media companies focused on Africa’s youth: Red Media Africa, a Public Relations company working in West Africa for Facebook, Uber, Union Bank and Heineken; Generation Y!, a TV and online content company with one of Nigeria’s most popular online newspapers and The Future Project, a social enterprise that hosts Africa’s biggest youth social change event, The Future Awards Africa.

His career began first in film 16 years ago and then in the media began 13 years ago, working for a youth counseling company and soon co-presenting two shows on Nigeria’s National Television Authority. He parleyed that into a thriving career as a TV producer, working for Nigeria International, a syndicated TV show in three continents; and Living it on South Africa’s Mnet.

“I returned to acting last year,” he mentions, credits including the stage play London Life, Lagos Living and what has been called Nollywood’s biggest-budget film, 93 days – capturing Nigeria’s historic response to the Ebola crisis on the continent in 2014. “Even the film projects fit into the theme of my life’s work: using the media to galvanize Africans to solve their own problems.”

Indeed, RED doesn’t fancy itself just another media company. It’s uniqueness lies not just in its combined content-communication-development, but also in its lofty ambitions of large-scale social change– using the media to galvanise young Africans to take political and economic action.

“We always say that in this century, the media can no longer be a bystander,” Williams shares, animated. “Our big audacious goal is social re-engineering. Political elite across the world have gotten too arrogant, too walled off, too uneven. It is time to hack establishments and hack these insular systems and return power to the hands of the people, where it belongs. And yes, for them to do whatever they wish with that power.”

That mission led them from building hugely popular media platforms in their native country, Nigeria to a specialization in governance communication across the continent.

“For us, building the sustainable business model is crucial. You listen to Peter Thiel or Elon Musk or Tony Elumelu and there is a growing global sense: social change must be driven by a sustainable model,” he says, recalling his role leading some of Nigeria’s most prominent youth activist campaigns. “After serial engagements focused on driving accountability and modifying government behaviour, we began to think more long term about our business and our misison: what is the sustainable business model that ensures we grow financially and build the resources we need to be effective, while at the same time driving the social change that is so central to our identity?”

The idea for the StateCraft model, interestingly, came from working for the man they first elected and then eventually defeated.

“Oronto Douglas (of blessed memory), the special assistant on strategy to President Goodluck Jonathan had asked our social enterprise to convene young leaders to chart a 20-year course for youth involvement in public service,” he recalls. “After that, our content company asked for an exclusive interview with the president. But then, after that request and a long silence, he suddenly calls us out of the blue two months later, and says they were impressed with our work and they had found out we had a PR sister-company: could we handle campaign communication targeted at the growing youth market?

“We saw in it every single thing that we were extremely passionate about: media, youth, nation building on the largest scale. And at the time, Jonathan was a change candidate like no other; what some called a breath of fresh air. He was the first minority president, he had a particular interest in the arts, had expanded the space for civil society and free expression, and was very passionate about engaging with young people