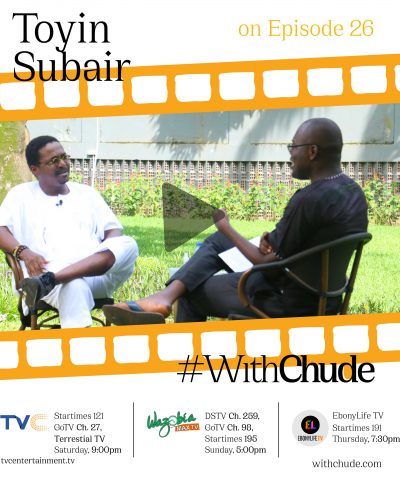 On this week’s episode of #WithChude, Media and Entertainment entrepreneur and investor, Toyin Subair, opens up to host and founder of Joy, Inc., Chude Jideonwo, about his trying journey, the events that helped him overcome the threat of failure and the stigma it comes with.

Recounting his experience with a fake fraud accusation, Toyin Subair revealed the grizzly details of how it led to multiple arrests and a dent on his good name. He told how the trust invested in him by a UK tech company helped him recover from the series of attacks on his reputation.

“Many people who were angry with what I was doing and who disliked me did many bad things just to cripple me. Because of my involvement with HiTV, I was arrested multiple times in three different countries. I was arrested in Dubai, UK and Italy; all on the back of what happened with HiTV,” he said, “It took a while for them to realize that I was not a fraud. It also took the bank to come to the UK to say, ‘no, he did not defraud us’ for me to be released. Some people had created a document and said that I had defrauded the bank of 36 million dollars, and that got my name on the red alert notice with Interpol for fraud. I have never taken anybody’s money before.”

Without realising that he was wanted for fraud, Toyin Subair had started plans with a tech company in the UK to start a business in Africa. Commenting on how he found out about the news, Toyin said that, “I was trying to do business with a Tech company in the UK and we had started plans in that regard. Then it was time to seek approval from the board of the company and I could not do that if they had not done their due diligence on me. It was during that period they found out I was on the list. The Chairman of the company called me for a meeting and informed me of their findings. I was so scared and worried because I couldn’t understand why my name was on that list.”

Speaking on how he overcame, Toyin Subair said, “What surprised me in all of it was when the Chairman said I shouldn’t worry and that the board had approved the business. As Nigerians, we already have a perception problem. To add to that, my name was on Interpol’s list for fraud and yet a UK based tech company wanted to do business with me in Africa. The plan of those who hated me was to totally destroy me, but this decision by this company helped my recovery.