This week’s episode of #WithChude featured Adenrele Oluwafemi Edun, popularly known as Denrele. In this exclusive interview with host Chude Jideonwo, the well-known television host opened up about being constantly bullied during his childhood, dealing with intense hate comments and trolls on social media, and how his siblings receive the whiplash of his unique self-expression.

Recounting the story of how he was responsible for his sister’s dismissal from her job, Denrele said, “My sister recently lost her job just because her employer found out she is related to me. This happened in a primary school. The headteacher randomly called her to let her go with the reason that if parents find out Denrele is your brother, they will withdraw their wards from the school, and it is something I cannot risk. When she called to tell me, I was saddened. Her knowledge, skills, and competencies were not in question, just the simple reason of being related to me. I felt so bad that my name would ruin things for her, and so sometimes she even denies knowing me.”

Even though Denrele is said to have set the foundation for the expression of individualism in Nigeria, he still finds himself at the receiving end of intense backlash and trolls, especially on social media. He says he deals with this by understanding that social media is not a validation for his existence and one has to remain true to themselves against all odds. To him, that is key to happiness. 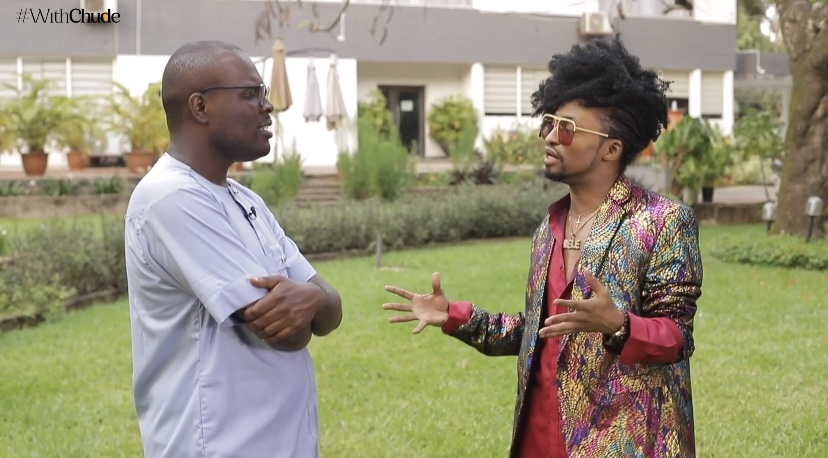 He also told Chude he firmly believes, ‘You cannot create fundamental change without a certain level of madness. This madness is non-conformity—the power to turn your back on the old formula and the courage to invent the future. To me, MAD means making a difference, and that is all I will ever continue to be”.

The award-winning media personality continues to inspire those around him, staying true to his guiding principle, “Always be an original”.

New episodes of #WithChude show every Thursday on EbonyLife TV at 7:30 pm, every Saturday at 9 pm on TVC Entertainment and on Vimeo by subscribing to watch.withchude.com, with reruns every Sunday on Wazobia TV Channel 98 at 5 pm, every Wednesday on Pop Central Station on DSTV Channel 189 at 8.00 pm,

and every Thursday on EbonyLife TV at 7:30 pm.