(CNN)The Obama Foundation Summit was a gathering of the world’s most thoughtful and passionate civic leaders.

From October 31st to November 1st, change agents from all walks of life gathered in Chicago to discuss ways to make more meaningful impact in their local communities.
Co-founder of Red Media Africa, Adebola Williams, spoke in the closing session themed “Collective Power” and earned a standing ovation from the crowd, including Barack Obama after his speech.
Speaking alongside Williams in this session were award-winning actor and musician Common, author and journalist Anand Giridharadas and founder of the Equal Justice Initiative Bryan Stevenson, among others. 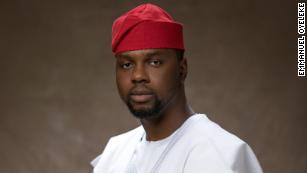 Adebola Williams, co-founder Red Media Africa
Williams addressed how youth and the media in Africa can rewrite the hopelessness that has for so long defined the continent.
Here are some of the quotable moments.
1. The African continent is filled with promise
Adebola Williams took us on a brief journey through the popular narrative of Africa as a place of desperation and helplessness to the present day Africa, which he believes is buoyant with promise. Williams believes that young people are doing great things around the continent and will lead it’s transformation.
Read the full article here (Source: CNN)