‘Release them, they did nothing wrong!’ Cries mother of the late Jimoh Isiaka. 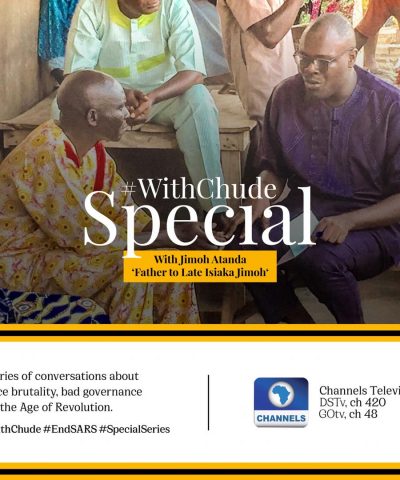 On this week’s episode of #WithChude, the parents of Jimoh Isiaka, who was murdered without cause by armed men of the Nigerian Police Force during the #EndSARS protest in Ogbomoso, shared the painful story of their loss with host and founder of Joy, Inc., Chude Jideonwo as they pleaded for the release of Mr. Olushola Mathew and Mr. Omole Adebayo.

Recounting the story of what transpired on the Sunday of the arrest, they shared on #WithChude how men of the Nigerian Police Force forcefully took two men who came to pay condolences to the grieving family.

“We are pleading in the name of God for Mr. Olushola Matthew and Mr. Omole Adebayo to be released because they did nothing wrong,” Mrs. Isiaka said. “They had just returned from church and decided to visit us to mourn with us for the loss of our son. As they were eating, some men of the Police force came and took them away. We have not seen them since then.”

Calling on the wives of the arrested men to join in on the conversation, Mr. Isiaka shared how worried the young wives of the men are feeling about the silence of the police on the whereabouts of their husbands.

“It is a case of mistaken identity,” Mr. Isiaka commented about the reason for the arrest in the first place. “Some people were being chased by the police men and they did not know where they entered, only for them to run into our house and grab our visitors. They did not do anything, as they only came to visit us straight from church.”

The parents of Jimoh Isiaka, the twenty-year-old graduate who was killed a day before his graduation, are pleading with the government and men of the Nigerian Police Force to release the men arrested unjustly, so that a repeat of what happened to their son does not recur with these innocent men.

#WithChude is a special series of targeted multimedia conversations and investigations focused on narratives that enable and strengthen the mind, heart, and spirit. New episodes of #WithChude show every Saturday at 9pm on TVC Entertainment, with reruns every Sunday on Wazobia TV at 5pm and every Thursday on EbonyLife TV at 7:30pm.
The extended play podcast of aired episodes are up on Spotify, iTunes, among other podcast platforms every Wednesday at 10:00am. Everyone can join the conversation.