“You’re only as important as the position you occupy” || Reuben Abati reveals how power slipped from President Goodluck Ebele Jonathan after his handover. 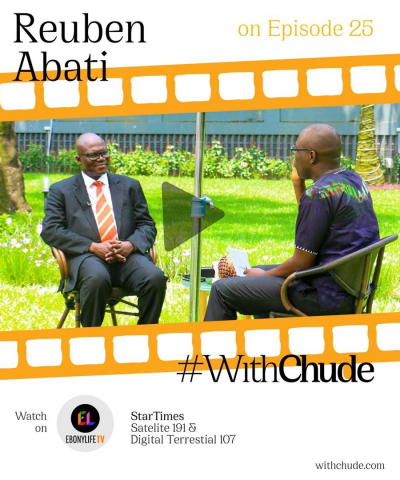 On this week’s episode of #WithChude, former Presidential Special Adviser on Media and Publicity, Rueben Abati, opened up to host and founder of Joy, Inc., Chude Jideonwo about the fickleness of power and why it is important to remember that real power belongs to the people in the long run.

Recounting the occurrences in the aftermath of the 2015 elections that saw his principal, Goodluck Ebele Jonathan, ousted from office, Abati revealed how quickly power slipped from him after conceding defeat.

“The first thing I noticed after that phone call that the President had conceded, is that people stopped coming to the villa to see the former President. The villa became a ghost town. The traffic to that villa just disappeared.”

“We were seeing pictures of people already going to the other side, to the President-Elect, including members of the Jonathan government. They had changed camp, and the speed with which it was done was amazing.” He disclosed.

As protests continue to rage across the country calling for an end to police brutality, many have raised concerns about how the incumbent President is handling the situation. With instances of police violence against peaceful protesters, seeming apathy from political leaders, and the slow-paced response when prompt response is needed, the Presidency may be underestimating the influence the people wield.

“Around the villa, some of the people started taking excuse that they wanted to go to their village, or London for a checkup. These were people who would ordinarily not move an inch, who wanted to be in the presence of the President all the time. That taught me a lesson, that you’re only as relevant as the position you occupy.”

#WithChude is a special series of targeted multimedia conversations and investigations focused on narratives that enable and strengthen the mind, heart, and spirit. New episodes of #WithChude show every Saturday at 9pm on TVC Entertainment, with reruns every Sunday on Wazobia TV at 5pm and every Thursday on EbonyLife TV at 7:30pm.

An extended play podcast of the interview with Reuben Abati is up on Spotify, iTunes, among other podcast platforms every Wednesday at 10:00am. Everyone can join the conversations.

A snippet of the interview with Rueben Abati can be viewed here.