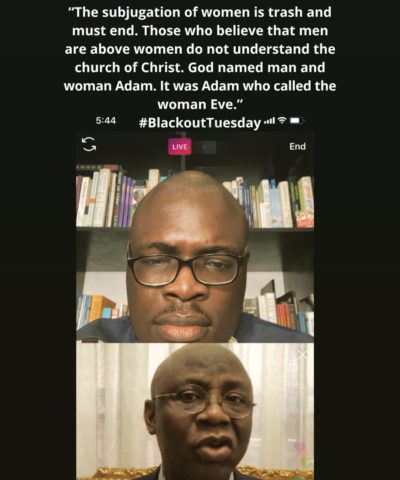 President, Latter Rain Assembly, and one-time presidential candidate in Nigeria, Pastor Tunde Bakare, brought fire to the hour-long conversation on The Future of Faith with Chude Jideonwo, founder of Joy, Inc., discussing governance, and the responsibility of the church during these times.

Speaking about his presidential ambitions, Pastor Tunde Bakare mentioned that in the 2011 elections he was “pressured to run with Atiku.” Nonetheless, God’s counsel to him has remained the same – his political career is not over, he will be called upon for more responsibilities and he is obligated to show up.

Pastor Bakare extolled the virtue of rising up to one’s responsibilities, referencing the church as a body that is required in these trying times to show up for its members.

“The church, which is you and I and the millions of Christians in this country, has one duty; to nourish the body of Christ, honor and serve it. That is you and I.”

“If the church does not do its duty, it will soon be empty and cockroaches and spiders will take over,” Bakare said.

The conversation also touched on gender, the state of violence against women, and the increase in questions about the role of religion in the continued subjugation of women, which is inarguably related to how women continue to meet violence at the hands of men.

New episodes of The Future of Faith show on Instagram Live @chudeity, Monday to Friday throughout the month of June. The series will be coming to TV subsequently, with an extended podcast edition across multiple podcast platforms. Follow Chude Jideonwo on his Instagram page to stay abreast of new episodes.