‘The People’s voice is in unity, and there is no stopping us’ – Rinu, activist and #EndSARS protester tells #WithChude. 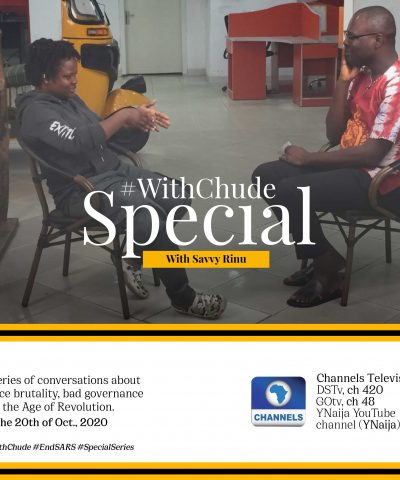 On the second episode of this week’s #EndSARS special edition series of #WithChude interviews, activist Oduala Olorunrinu, popularly known as Rinu, shared with show host and founder of Joy, Inc., Chude Jideonwo her inspiration to speak up about police brutality in Nigeria.

As one of the visible advocates of the #EndSARS movement, Rinu shared her experience on and off the battlefield in the fight against police brutality. Recounting her experience since the #EndSARS movement began, Rinu spoke on the things that gave her the courage and strength to fight on amidst opposition, and the frustration that has fueled the collective rage of Nigerian youths at the frontline of the leaderless protest.

“We expect even someone as low as a DPO to be sacked already,” she said. “At least, let us see something but nothing is happening. This only means that there is some kind of secrecy around it and we will unravel it. Right now, the people’s voice is in unity and we are not stopping. This is the revolution we have all been looking for.”

The powerful image of Rinu, on the frontlines, holding her fist up and crying out at the top of her voice, roused many young people around the country to call for an end to police brutality and, on a broader agenda, bad governance. She articulated very clearly in this interview what Nigerian youths have demanded and how, despite the ease of implementation, the government has done everything but implement them.

While the movement which has been followed closely by millions of people across the globe – has since been mired in tragedy, the youths have remained resolute in keeping their voices loud until the nation’s leaders hear them and do the right thing.
#WithChude is a special series of targeted multimedia conversations and investigations focused on narratives that enable and strengthen the mind, heart, and spirit. New episodes of #WithChude show every Saturday at 9 pm on TVC Entertainment, with reruns every Sunday on Wazobia TV at 5 pm and every Thursday on EbonyLife TV at 7:30 pm.

An extended play podcast is up on Spotify, iTunes, among other podcast platforms every Wednesday at 10:00 am. Everyone can join the conversations.
A snippet of the interview with Rinu can be viewed here.