“To bring the military against unarmed citizens? Their conscience should be seared by now,” – Long-term activist Maureen Kabrik on the governments approach to the #EndSARS protests. 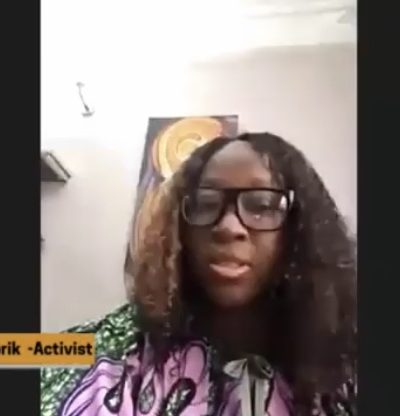 On yet another episode in the special edition series of #WithChude, long-term activist, Maureen Kabrik, revealed the nature of the #EndSARS protests which held peacefully across many states until suspected state actors infiltrated them.

“I was out on the street with young people three times in Abuja. Each of those three times, we were brutalised by the state police. Each time the young people stayed peaceful, they resisted every form of attack, every form of incitement. Seeing that resolve and resilience gave me renewed hope in the country.” She said.

The #EndSARS protests took a new turn on October 20, 2020, when armed hoodlums attacked some parts of Lagos State; prompting the Lagos State Governor to declare an impromptu 24-hour curfew. Protesters at Lekki toll gate decided to stay on the street regardless. Citing how they have remained peaceful for 12 days, it was considered safer to stay there than scatter and get stuck trying to get home.

The Nigerian military had, sometime around 7 pm – hours before the extended start of the curfew at 9 pm, opened fire on the unarmed protestors as they sat on the asphalt; singing the national anthem.

“It is a shame. It is a shame to the president, to the entire military, and the entire people advising him. He should be ashamed of himself that at his age all he could do was to bring out guns and bullets against young Nigerians. Is this the best he can do? Is this the best a grandfather can do against his grandchildren? To bring the military against unarmed citizens? Their conscience should be seared by now,” she passionately aired.

The full interview with Maureen Kabrik can be viewed here.