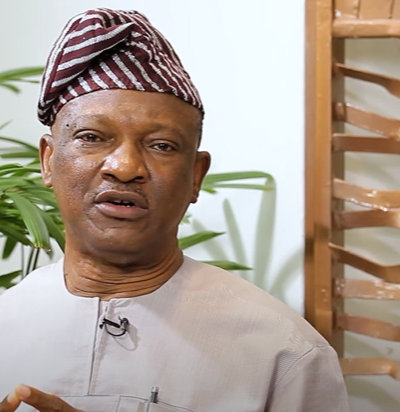 This week’s episode of #WithChude featured Nigerian pharmacist and two-time Lagos State gubernatorial candidate, Jimi Agbaje. In this episode, he disclosed the details of some of the popular controversies he’s been involved in as well as his reactions to the election losses in 2015 and 2019.

The People’s Democratic Party candidate was defeated in the last two elections by former Governor Akinwunmi Ambode and incumbent Governor Babajide Sanwo-Olu – both of the All Progressives Congress. Despite these losses, Jimi Agbaje remains surprisingly optimistic. When asked what it’s like to lose an election, he said, ” I never shed a tear. I said I wanted to offer a service, I have something that I can do and you said I can’t do it. You’re the loser not me. I wasn’t happy but I have never shed a tear. There’s never been any bitterness”.

However, when asked the question, ‘Would you be running in 2023?’, he humorously responded, “for what?”

Known by many as a rather professional and serious-minded politician, Jimi Agbaje was the centre of controversy in 2015 after a viral video of him partying with former president Goodluck Jonathan made rounds on social media. On this, he said, “You can’t be an activist all the time. Then, people in Lagos were saying we will vote for you but not for Jonathan.  How do I campaign for myself and not campaign for my presidential candidate? People were not ready to accept that”.

Speaking about his relationship with former Anambra State Governor, Peter obi, he said, “He had always been my best Governor even when I didn’t know him. I’ve always said that this was my best Governor. He’s been the kind of Governor I would want to be. He tried to be himself. He was there for service not self”.

Jimi Agbaje further disclosed that he was offered the position of Deputy Governor of Lagos State. However, this position came at a price as he had to lie about his senatorial district. He declined, saying, “It means those people have lost their opportunity to be represented. I don’t want power for the sake of it.”

When asked about what he would say to young Nigerians who believe that he is just like every other politician, Jimi Agbaje said, “I was just like them. That’s how I started. But if we’re all the same, why not come out and be different? If you don’t like what you see, come and act the part you want to see. Nobody will change our country for us. If you think Jimi Agbaje is all one and the same, get your friends and associates and say ‘this country, we are going to build it, tougher.”

Watch the video below: